“Because a lot of podcasting was audio-only people thought, well, it’s like radio, all you need is, you know, a performance license. And that’s not true. It’s exactly like that, and that we’ve all learned, you know, in time, it’s kind of developed to the point where you have to sync music from a licensing perspective with podcasts the same as you do film or television. So, you know, helping people navigate that, that was one of my big goals.” — Mac McIntosh

This episode’s guest is a music supervisor and film producer based in Dallas, Texas, who’s spent over twenty years in the entertainment industry, with additional experience in music clearance, music licensing, film distribution, and more. He’s the founder of Musiclerk.com, a music and audio agency that provides music supervision, music clearance, post audio editing, sound design, and music composition for their film, television, podcast, and video clients. He also has experience helping filmmakers and production companies secure distribution for their projects.

His name is Mac McIntosh, and in this interview, we’ll be taking a deep dive into the world of music and how important it can be to the shape of a project. Mac’s perspective will offer a golden opportunity to learn more about the inner workings of this fascinating field, and how it might come into play with your own content creation.

The Cadence of Cinema

We start the interview with a look at Mac’s audio influences while growing up, from the rhythm of He-Man’s catchphrases to the cadence of cinematic audio. “The music played a big part of it too from a dynamic standpoint for me,” he explains as he recalls how movie soundtracks helped inspire his love of music. “I think that was something I really grabbed onto at an early age,” he says, “and realized that it does affect in ways you don’t even realize.”

The Willingness to Not Give Up

Mac goes on to recount how his early career as a musician led him to become a producer and music supervisor. “Growing up in Nashville and being a guitar player,” he says, “you quickly realize there are… at least a thousand other guitar players that are either better or a lot better than you are.” We talk about his first music industry blog and the young artists he met whose talent and perseverance inspired him. “I think just determination and just the willingness to not give up are the biggest things, especially for some of the artists that I interviewed at that time.”

We go on to talk about the early days of social media, the new kinds of success and exposure the internet brought to independent artists, and whether today’s older, more structured online culture can still support that sort of breakthrough success. “Because the algorithms had not reached a level,” he tells us, “that everything was, you know, kind of suppressed and you had to spend money in order for it to be seen like it is nowadays, it was very organic and real.” 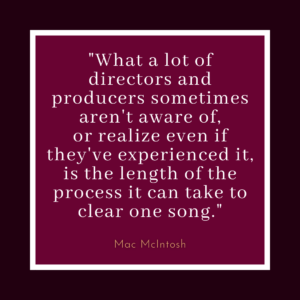 Next, we look back at how Musiclerk began, as Mac realized that both musicians and industry professionals need someone who can guide them through the complicated process of music clearance and licensing. “What a lot of directors and producers sometimes aren’t aware of,” he notes, “is the length of the process it can take to clear one song.” He tells us about the first questions he asks to gauge the right sound for a project, the process behind securing it, and the movies and series soundtracks that he’s supervised.