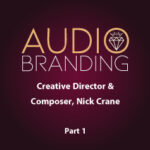 Nick Crane has been making music since he was 8 and making movies since he was 11. In 2019, he launched Racket Club- a boutique music production studio. Nick’s had the pleasure of working with Nike, Verizon, Ford, and others. Racket Club also creates scores for short films and his most recent score released in […]