“Ultimately, what happens with Spotify and Apple and YouTube or any of the other platforms out there, the majors are going to set the precedent on what the licensing deals look like. That’s eventually going to trickle down to the independent artists to where they just they don’t get a great deal, I mean, they’re never going to really see substantial money, even if they’re doing millions of streams.” — Mac McIntosh 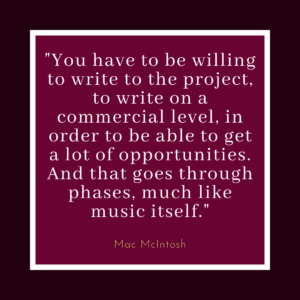 This week is the second half of my interview with music supervisor and film producer Mac McIntosh. We talk about how social media is changing the licensing landscape, what’s truly involved in building the right soundtrack, and which musical genre he’s hoping might make a cinematic comeback thanks to shows like Stranger Things.

We start the second half of the show with a closer look at his team, which includes musicians and Foley artists, and some of the series they’ve worked on. “Creatively, I had to do a lot of things that weren’t traditional to the music clearance space,” Mac explains as we look back at one project. “A lot of creative conversations had to take place to make certain things happen, and to prevent certain things from happening as well, from a licensing standpoint.” 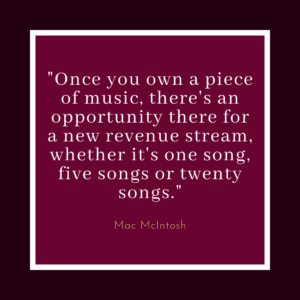 Living by the Single

Mac talks about some of the soundtrack trends he’s seen in movies since the turn of the millennium, and how he’d like to see rock music make a Hollywood comeback. We move on to a look at how social media has made things both easier and more challenging for indie artists, and how video games and streaming shows are creating new opportunities for exposure and fame. “They realize that you live and die by the single these days,” he notes. “Artists are at the point where they’re basically hustling on a daily basis, trying to figure out how to maintain their careers, while at the same time most of them have to have a full-time job to go along with that.”

We wrap things up with a growing industry trend that he advises clients looking to add a musician to their project to follow. “It’s better to do a made-for-hire or paid-for-hire deal with an artist,” Mac says, “where you pay them directly to create an original piece of music for you… versus licensing something that you’re not sure is a good deal or not.” He points out the advantages of owning your own audio assets, such as greater stability and potential revenue, and we discuss some of the different licensing options available and which ones might best fit a given project.