“Producers are people who are interested in developing and creating new ideas that expand human awareness and human consciousness.”

This week is part two of my interview with online media authority Randall Libero. He’s an executive producer of Voice A

merica as well as co-producer of the new dramatic podcast “Marilyn: Behind the Icon.,” and we’ll be talking about myths, movies and the future of audio storytelling.

The Power of the Image

We begin the second half of the interview with a closer look at the concept of cinematic audio and “painting the scene with sound.” Randall discusses the innovative techniques of such cinematic legends as Stanley Kubrick and Orson Welles, and how they understood that art isn’t just created, but is brought to life by its audience. “When you look at a great painting,” he explains, “there’s so much of your interpretation of it from everything that you’ve experienced in life, and you interpret that painting completely different from somebody else who’s had a completely different experience in life.”

Stories That Bring Us Together

Randall also talks about the myths and archetypes of our ancestors, and the role imagery, geometry, and sound played in bringing those ancient stories to life. He sees such a holistic approach to stories making a return in the 21st century, and with it an opportunity to forge a new connection to art. “The challenge is can we actually create content both on the screen and through storytelling, through audio sound, that actually expands human consciousness.”

The Way That We Dream 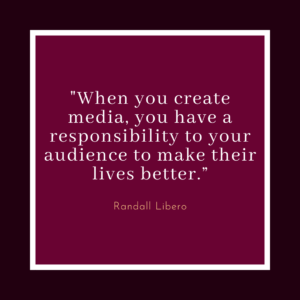 “We’re in a full-out revolution now, and you can see that in many forms today.” Randall and I talk about how social media and the information age have empowered millions to create and share their work on an unprecedented level. “This digitized media landscape,” Randall notes as we look to the future, “has disrupted and forever changed how movies and media are changing the way we think, the way we live, the way we relate, and the way that we dream.”

The episode concludes with a discussion of audio storytelling and the unique techniques that are involved in bringing a story to life entirely through sound. We explore just what it truly means to be a producer in the age of new media and what responsibilities creative producers have toward their audience and to future generations. As Randall puts it, “when you create media, you have a responsibility to your audience to make their lives better.”

Next week I’ll be interviewing Michael Joly, the founder and CEO of solu and creator of the n.o.w. Tone Therapy meditation device, for a look at sound, stillness, and the healing power of music.

“All throughout this, in the background, it’s been, for me, a study about the effect of media on human consciousness.”

When it comes to creating a brand and being known as an authority in your field, podcasting truly is the new frontier. 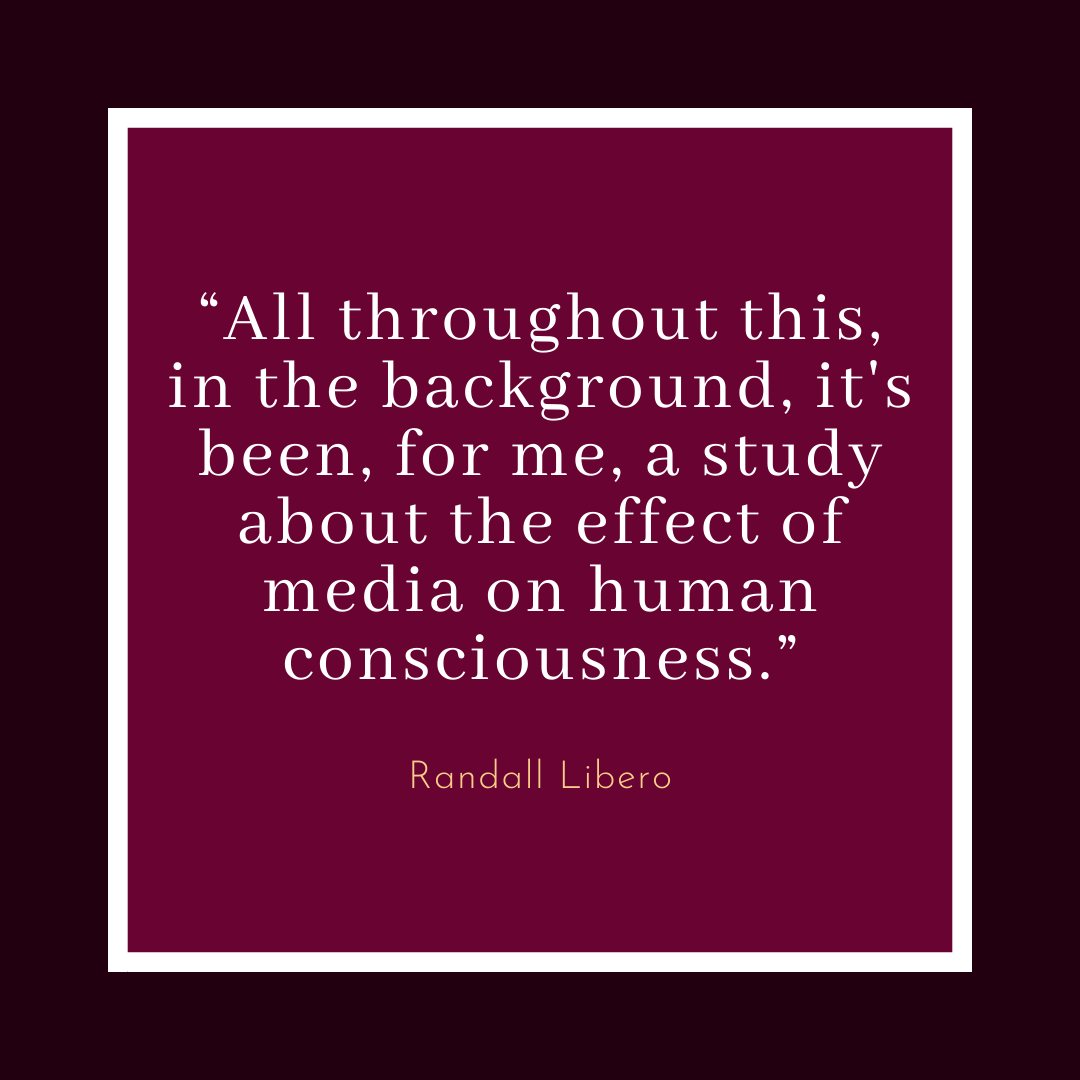 This week’s guest is on the forefront of that frontier, particularly audio drama: he’s a producer, online media authority, speaker,

and radio and TV host who’s been creating original productions for network and independent television, broadcast news, and online media for over thirty years. His career began as a cameraman, editor, and producer in Los Angeles during the 1980s, and in the 1990s he created the first online media research facility and historical news archive for the U.S. State Department’s International Bureau of Broadcasting.

He switched to the world of journalism, writing international breaking news for CBS Radio and AOL Time Warner and today he co-produces a dramatic podcast, “Marilyn: Behind the Icon.” His name is Randall Libero, and if you want to learn more about what it takes to have a successful podcast, this is the interview for you!

A Different Kind of Kid

We begin with a look at Randall’s childhood, his heartwarming first encounter with his grandfather’s wire recorder, and how a near-death experience at the age of five changed his perspective and gave him an early sense of maturity and awareness of the future. “I was a different kind of kid,” he explains, and he knew from an early age that he wanted to devote his life to exploring the magic of sound, to sparking the imagination and bringing stories to life.

How Did They Do It?

“I knew King Kong was not real,” Randall explains, remembering the movie monster who first inspired his fascination with sound, “but how did they do it?” We talk about the science-fiction and fantasy shows that influenced him as he grew up, such as The Outer Limits, The Twilight Zone and the groundbreaking 2001: A Space Odyssey, and the beginning of mass media and commercial entertainment, a new form of storytelling that emerged quite literally before his eyes.

A Study of Consciousness

Randall and I talk about his wide-ranging career, spanning from broadcast television to international news to online radio and podcast production. Through it all, he says, his focus has remained on human consciousness, the complex relationship between the storyteller and listener’s expectations, and how movies have helped transform our very 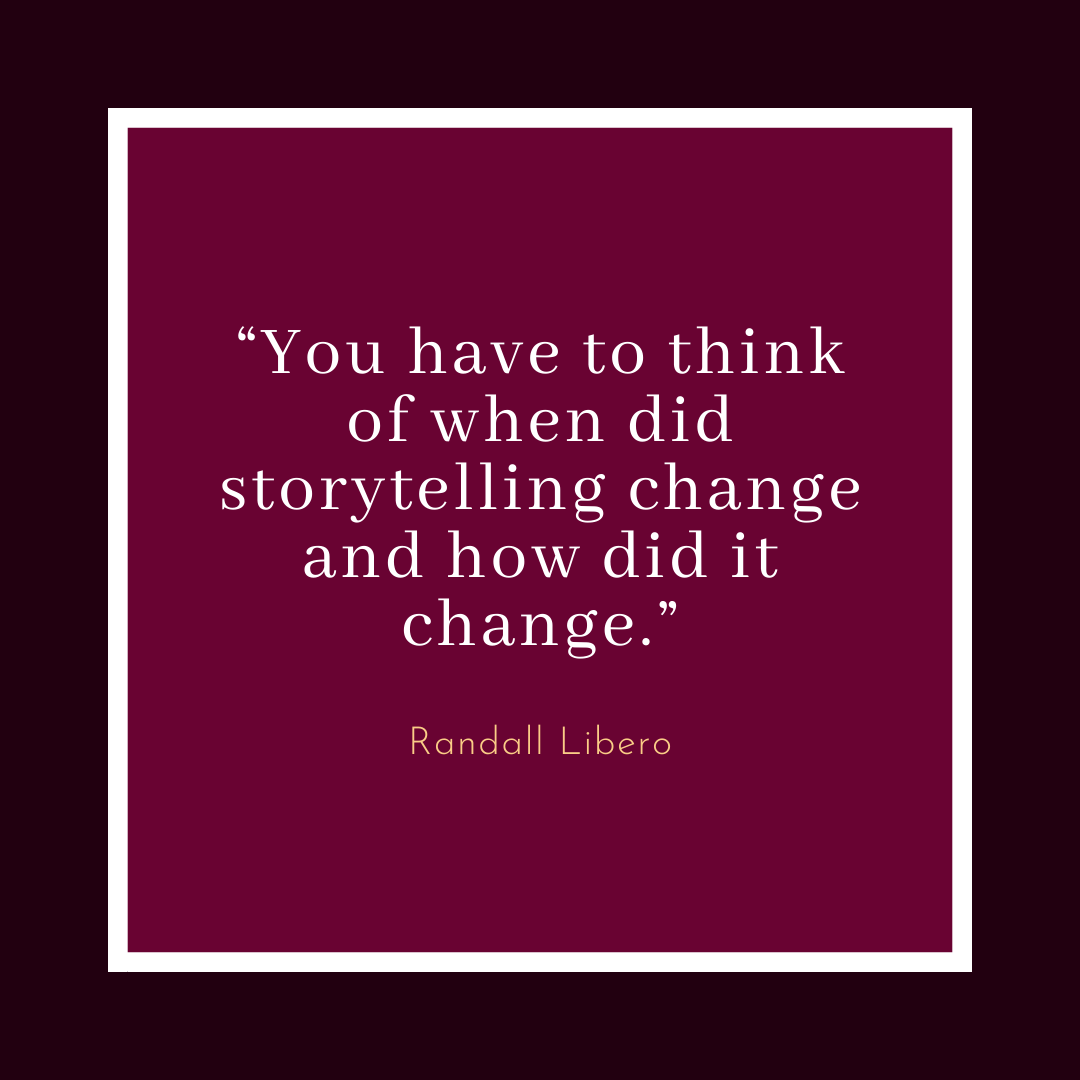 definitions of stories. “You have to think of when did storytelling change and how did it change.”

With the evolution from silent movies to traditional Hollywood films and now podcasts, stories are taking on entirely new forms and being told in new ways. Randall discusses the way both stories and their audience has evolved alongside the ways stories are told, and how the role of sound has changed along with them. “Most movies even today,” he observes, “are seventy or seventy-five percent sound.” Dramatic audio stories like his new podcast Marilyn: Behind the Icon seek to take that further, bringing to life a character’s thoughts and memories using sound and the power of imagination.

Be sure to check back next week for part two as we talk about cinematic audio, the future of mass media and storytelling, and take a sneak peek at some of Randall’s upcoming projects.