“Music has been a part of my life for my whole life and I didn’t realize that most kids don’t grow up with that kind of music exposure.”

Filmmakers who understand sound and why sound is essential to their production are a favorite topic on the Audio Branding Podcast. I’m excited to introduce the co-founder and lead producer for Wewa Films, a company specializing in heartfelt, cinematic video stories. In addition to being co-founder of Wewa Films, he’s also a college professor, teaching public relations writing, persuasion, and public speaking at Florida State University. He’s produced videos nationwide for high-profile clients, including McDonald’s, the Federal Highway Administration, Florida’s Great Northwest, and the Children’s Advocacy Center. In addition to video, Kevin also creates written content and has published articles for The Washington Post, Desktop Documentaries, Business Energy Magazine, and Public Roads. 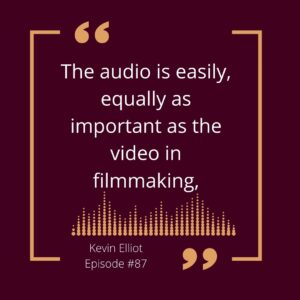 Why Audio is as Essential as Visuals in Filmmaking

“The audio is easily, equally as important as the video in filmmaking,” says Kevin. His earliest memories of sound made a strong impression on him as a child, listening to his dad’s sermons.

His father was a minister in the Air Force, better known as a Chaplain, and he remembers hearing his father “professionally speaking once a week” during his sermons. While his dad was talking, his words would be backed up by music. Whether it was the choir or instrumentals, he remembers having exposure to many different sounds. “The overlay and interplay of voice gives certain effects to the sound and it was fascinating.”

Raised as a “Music Kid”

Starting piano lessons at the age of eight, Kevin added learning to play music to his music appreciation repertoire. After piano, he practiced music in his school band starting in middle school and started college on a music scholarship from high school. 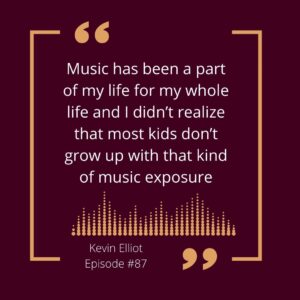 How Teaching Compliments His Audio Work

Join me next week for Part II of my interview with Kevin Elliot where we’ll continue our conversation about audio as an essential part of video production.

Get your complimentary mini e-book and learn how to create your personalized audio branding strategy with my Top Five Tips for Implementing an Intentional Audio Strategy.

Do you need a voice talent for your next project? Visit my voice over website to find out more about how my voice can help you with your audio brand.  You can also subscribe to the Audio Branding Podcast on YouTube to watch the show’s latest episodes.

Please leave the Audio Branding Podcast a review so others can find the show on their favorite podcast player!