“First things first, to get a podcast to sound good is not hard. Many people think that it’s so hard to make it sound great: it’s not. The first thing they have to remember is that, if you have a good recording, I would say that you don’t even need an editor to get it done for you at the end.” — Nicolae Bogdan Bratis 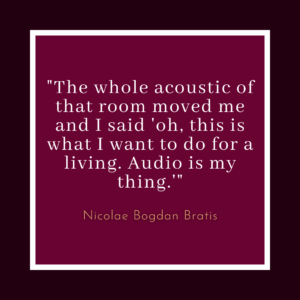 This episode’s guest comes from a musical background and has had quite a lot of success as a musician in Romania, having been in the finale of X-Factor 2013.  He sings, plays several different instruments, has produced his own music, and he performed throughout the UK with his own solo project before the pandemic started. He moved to the UK in 2016 to study music production, and in 2018 he started his own podcast production company called Saw and Sine.  Now he edits podcasts, creates jingles, restores audio, and even records and produces audiobooks. He’s always been in love with sound, whether it’s music or spoken audio, and he’s all about helping his clients get the best audio brand possible.

His name is Nicolae Bogdan Bratis, and if you want to work in sound, or if you want to improve your sound so your message can reach deeper, this interview is sure to provide a lot of great tips.

We start the show with a look at Nicolae’s earliest memories of sound, his family’s musical history, and his childhood music lessons. “My teacher,” he recalls, “when I was just ten, I guess, told me that I have a musical ear, I can hear sounds, I can hear the pitch and everything.” He talks about his encounter with a teenage rock band at a music school in Romania, and how it inspired him to pursue a career in sound.  “I was always interested in the technical part of audio,” he says, “not just into the artistic part, and I loved producing music, I loved working with tracks, working with computers, all that jam.” 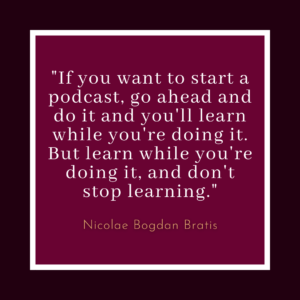 Nicolae goes on to tell us about the distinctive name of his studio, Saw and Sine. “The sine wave,” he explains, “is the purest waveform you can generate with a synthesizer and the saw-tooth is the busiest, the most harmonic waveform you can generate with a simple circuit. That’s kind of like simplicity and complexity at the same time.” The physical aspect of sound’s always fascinated him, and we talk about how sound not only surrounds us but affects us in ways we don’t often consider. “Before you actually have the earthquake, you get that big rumble,” he says. “That’s all sound waves.”

We talk about how the pandemic, and the remote audio industry that emerged from it, helped shape his career as a podcast producer, and the hidden value of sound quality. It truly is a hidden gem, as he reminds us. “It’s there, it exists, but it’s hidden,” he adds, “and if you don’t pay attention to it, it can destroy your brand.” Fortunately, creating quality sound these days doesn’t have to involve a traditional recording studio. “You just need a basic microphone,” Nicolae says, “because the technology’s evolved so much. With just a few pieces of equipment, you can get something that sounds really good.”

Nicolae offers some recording tips, including his advice to turn off the echo cancellation feature when it comes to streaming audio and replace it with a simple pair of headphones. Echo cancellation “solves the effect,” as he puts it, “but it’s not solving the actual problem.” As the first half of the interview comes to a close, he tells us about the podcasts he’s helped shape and transform as a producer and his advice for people who are just starting out. “If you want to start a podcast,” he says, “go ahead and do it and you’ll learn while you’re doing it. But learn while you’re doing it, and don’t stop learning.”

Tune in next week for the second half of the interview as we talk about Nicolae’s approach to writing jingles and commercial compositions, discuss microphones and tips on getting the best recording sound possible, and a surprising new direction that podcasting’s already starting to take.

Connect with the Guest