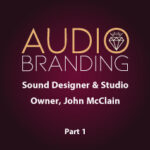 John McClain knows a thing or two about sound.  For one thing, he’s the owner and lead sound designer/mixer at The Dog and Pony Show in Las Vegas, Nevada (https://www.dogandponystudios.net/).  For another, he won a Grammy for his work with the late, great George Carlin, and an Emmy for his work with HBO on the […]